Bald Eagle, immature landing, Homer, AK
Image copyright 2006: Arthur Morris/BIRDS AS ART
Canon 600mm f/4 L IS lens with EOS 1Ds MII.  ISO 400.
Evaluative Metering plus two stops off of gray sky: 1/1000 sec. at f/5.6.
Without a bright white head, immature eagles need less light for a proper exposure than adults.  When working in manual mode (as you should be when doing eagles) it is best to lower your shutter speed a click or two when you see a young bird coming into range...
URGENT HELP NEEDED
I received the e-mail below from an old friend, Dan Smith:  I sent donated three of my favorite prints to the auction.  Established professionals who receive the Bulletin are invited to make donate a framed print only ASAP by following the directions below.  All are invited to make a cash contribution by clicking here: https://www.blacktie-colorado.com/online_sales/nonprofit_donation.cfm?id=1534
Dear Fellow-Photographers,  One of my colleagues at the Rocky Mountain News, Steve Nickerson, is battling a rare and life-threatening form of the disease Scleroderma. He has recently found a very promising treatment but the catch is that it is ungodly expensive. Unfortunately, the insurance company WON'T cover the treatments.  Our staff has been working on staging a print auction with all proceeds going toward Steve's treatment fund. So I'm putting a shout out to all you folks who'd like to contribute a photo (or photos) to the cause. Any image that you are proud of and more specifically will generate a high bid is welcome. To date we have a number of Pulitzer-winning images, work from Eugene Richards, Jim Natchwey, Joe Rosenthal and many others, but more are needed. (Note: Prints can't be returned if they don't sell.)   The event is March 26, but we'd like to get prints by March 23rd. Here is a link to the "event page" for the auction: http://www.tinyurl.com/kpp55

Ship what you can to: Dennis Schroeder, Photography Department, The Rocky Mountain News, 400 W. Colfax Avenue, Denver, CO 80204.   Here is a story about Steve at NPPA:  http://www.nppa.org/news_and_events/news/2006/03/nickerson.html   Thank you VERY MUCH.  E-mail me if you have any questions:  mahoneyj@rockymountainnews.com

Joe Mahoney Staff Photographer/The Rocky Mountain News
Bald Eagle above wintry mountains, Homer, AK
Image copyright 2006: Arthur Morris/BIRDS AS ART
Canon 70-200mm f/2.8 L IS lens (handheld at 120mm) with EOS 1Ds MII.   ISO 400.
Evaluative Metering +1 stop off the light-blue sky: 1/1000 sec. at f/6.3.
There is nothing more satisfying than pre-visualizing an image, teaching the concept to the group, and then making an image as perfect as the one that you saw in  your mind.  I explained that by using 45 point AFPS in AI Servo mode it would be possible to make an image featuring an eagle in flight well off center while working wide so as to include the distant snow-covered mountains and a strip of Cook Inlet.  There was a bit of luck involved in catching such a spectacular wing position, but luck favors the well prepared...
NOME IPT w GREG DOWNING
Greg Downing and I are taking two groups to Nome, AK to photograph Arctic nesting birds (in breeding plumage) that are difficult or impossible to photograph anywhere in North America.  Some of the expected species are Western and Semipalmated Sandpiper, Dunlin, Bar-tailed Godwit, American and Pacific Golden-Plover, Black-bellied Plover, Gyrfalcon, Arctic and Aleutian Tern, Golden-crowned Sparrow, Yellow Warbler, and Common Redpoll among others.  Some shorebird chicks are expected.
Greg's group has two openings.  Please contact BAA via e-mail at birdsasart@att.net if you are interested in joining us.   June 10-19, 2006.  Ten full days: $3750 includes all meals and ground transportation.  Flights to and from Nome and lodging not included.
Bald Eagle, Homer, AK
Image copyright 2006: Arthur Morris/BIRDS AS ART
Canon 600mm f/4L IS lens with 1.4X II TC and EOS 1Ds Mark II.  ISO 500.
Evaluative Metering +1/3 stop: 1/60 sec. at f/5.6 set.
Fill flash with Better Beamer at -2 stops.
Again, the BLUBB allowed me to make a sharp image at a slow shutter speed.  The red background was a red building.
LENS PEN INFO

John Shaw tried a Lens Pen in San Diego and now recommends them unequivocally. We have sold more than 2,000 Lens Pen Combo kits.  Two folks wrote for additional help.  The other 1,998 were thrilled with the results. Here is the most recent e-mail I received on the subject:

Dear Sirs,  Gotta say, well done for making this simple product available to us, it is fantastic; so easy to use, great results, no hassle. Why are more people not shouting from the rooftops about this simple way to get rid of sensor dust ?  Thanks from the UK !!!  Cheers, Henry Gilbey
We sell the combo kit with two Lens Pens.  Since our first sales efforts I have realized that there are several great uses for the larger lens pen which is traditionally used for cleaning the front element of a lens.  I have always had trouble cleaning the front element of a teleconverter without disturbing the rubber gasket that encircles the lens element.  You can use the larger Lens Pen to do this quickly and easily.  And the same goes for the rear elements of various lenses and teleconverters.  Many of these have recessed rear elements that are hard or impossible to reach.  Use your large Lens Pen on these rear elements after first using your blower brush.
We should have let folks know that in addition to a Lens Pen set (and our invaluable directions that are sent via e-mail), you need a large Blower Brush and either a micro-fiber cloth or a single Pec Pad.  The latter items are used to remove the small bit of graphite lubricant from the tip of a fresh lens pen.
The image below is not a photograph of the surface of the moon onto which a vacuum cleaner bag has been dumped.  It is a photograph of the dirtiest sensor I have ever seen.  It was from an EOS 20D owned by one of the first Homer IPT participants.  He shall go un-named...  I am not sure where the gunk on the sensor came from but it was easily removed by the Lens Pen. 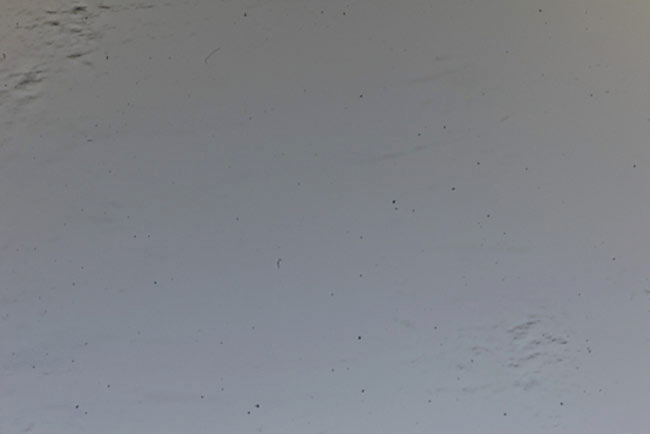 After two cleanings with the small Lens Pen (following our directions to the letter) here is the un-manipulated  (honest!) result:

Detailed instructions for creating before and after test images like those above are included in our Lens Pen instruction file.  The file is sent via e-mail after we ship your order.  (As we have had so, so many orders, we have missed sending a few of the instruction files.  If you do not receive your file, please send us an e-mail reminder.  Thanks!
You can order a Lens Pen Combo Kit here:  http://www.birdsasart.com/lenspens.htm

I will be the featured speaker at the Charlotte Harbor Kayak & Wildlife Festival (May 6-7,2006, at the Port Charlotte Beach Complex, 4500 Harbor Boulevard, Port Charlotte, FL).  We shall post a schedule of my programs in a future Bulletin.  In the meantime, you can find the basic info here:  http://www.charlotteharbortravel.com/

Bald Eagles at Fishing Hole, Homer, AK
Image copyright 2006: Arthur Morris/BIRDS AS ART
Canon 70-200mm f/2.8 L IS lens (handheld at 125mm) with EOS 1Ds MII.   ISO 400.
Exposure set after histogram evaluation: 1/250 sec. at f/29.
The words Homer, AK have been synonymous with Bald Eagles for as long as most folks can remember.  In my opinion the eagle feeding ban is a most unfortunate development.

GALAPAGOS PHOTO CRUISE/YACHT BELUGA  JUNE 30-JULY 7, 2006.  We now have a single opening for a male to share a cabin.  Please e-mail janie@distinctive-journeys.com for details if you would like to join us.

Bosque #1: "The Fall Color IPT"  NOV 14-16, 2006.  Slide Program on the evening of NOV 13.  3-DAY: $929.  (Limit 14, Openings: 8)  This IPT should feature a better chance for a day or two of the rare south winds that drastically improve flight photography and will definitely feature the brightest fall-color cottonwoods.

Bosque #2:  "The Pre-Thanksgiving IPT"  NOV 19-21, 2006.   Slide Program on the evening of NOV 18.  3-DAY: $929.  (Limit 14, Openings: 9)   This and the next IPT have sold out for the past eight years.  In 2006 I may once again be hosting a Thanksgiving day luncheon buffet. If it goes, folks will need to reserve a spot and pay in advance.  Details TBA. Dinner will be strictly limited to 50 folks.  This IPT will feature increasing numbers of geese and cranes with lots of great opportunities.

Seminar: DEC 2-3, 2006.  BIRDS AS ART "The Art of Nature Photography; It Ain't Just Birds!" How-To Weekend Seminar in Albuquerque, NM.  Details TBA.  Folks wishing to combine an IPT with the Seminar should sign up for either Bosque #3 (above) or Bosque #4 (below).

Bosque #4:  "The Full Moon IPT"  DEC 4 (mid-day) through DEC 7 (mid day), 2006.  3-DAY: $929.  (Limit 14 Openings: 11)  Slide Program mid-day on DEC 4.  Co-leader TBA.  This IPT includes a half day of photography on the 4th, two full days of photography on the 5th  and 6th, and a final half day on December 7th.  Limit 14.  This IPT has been scheduled to maximize the opportunities to include the rising and setting full (DEC 5) and near-full moon in your images.  There will be lots of the usual chances as well, and this time period has provided more than its share of spectacular sunrises and sunsets over the years.

ANTARCTICA PHOTO CRUISE/JAN 2007 w co-leader Greg Downing.   We are leading a small group of photographers on the If you would like details for this trip or have your name added to the waiting list, please e-mail janie@distinctive-journeys.com immediately.

Amazingly, we already have 27 folks registered for Bosque 2006.

April 28-30, 2006.
Bald Eagle braking in flight, Homer, AK
Image copyright 2006: Arthur Morris/BIRDS AS ART
Canon 70-200mm f/2.8 L IS lens (handheld at 130mm) with EOS 1Ds MII.   ISO 400.
Evaluative Metering +2 stops off the gray sky: 1/1600 sec. at f/7.1.
For the first six days or so we were blessed with good snow cover.  This provided lots of reflected light that  illuminated the undersides of the eagles in flight.
USED WIMBERLEY HEADS FOR SALE
Rob Wilson (Texas Tournament Hold-Em CDs: http://wilsonsoftware.com/) is offering the following items for sale:

Two F-4 flash arms for the original style Wimberley heads in excellent condition: $125 each - shipping included.
Please contact Rob directly at wilsonsw3@cox.net or by phone at 520-399-1618.
Bald Eagles on beach in predawn light, Homer, AK
Image copyright 2006: Arthur Morris/BIRDS AS ART
Canon 70-200mm f/2.8 L IS lens (handheld at 120mm) with EOS 1Ds MII.   ISO 400.
Evaluative Metering +1 stop: 1/400 sec. at f/2.8.
The RAW file for this image was created using Auto White Balance.  It had a severe blue cast as expected.  Converting with either Cloudy or Shade WB helped a bit, but a blue cast remained.    Dan Twitchell, a participant on the first IPT suggested setting the Color Temperature in Breezebroswer to 10,000 and then converting.  Voila!  The pinks that I had seen when I made the image were perfectly rendered.  It is amazing how many valuable lessons I learn from my students. Thanks Dan!

Note: Arthur Morris has been a Canon contract photographer since 1994 and continues in that role today.  Hunt's Photo of Boston, MA is a BAA sponsor as it Delkin Devices.  Back issues of all BAA Bulletins are archived in the Bulletin Archives which may be accessed from the home page at www.birdsasart.com