BIRDS AS ART BULLETIN 155
DECEMBER 15, 2004
MORE BIRDS AS ART KUDOS
GOOD POINT GREGORY!
NEW CANON GEAR FOR SALE
ROBERT O'TOOLE BOSQUE IMAGES
Sandhill Crane, Bosque Del Apache, NWR, San Antonio, New Mexico
Image copyright 2004 Arthur Morris/BIRDS AS ART
Canon 600mm f/4 L IS lens with 1.4X II TC and EOS 1D Mark II on Gitzo CF 1325 tripod with Wimberley head.  AI Servo AF with Central Sensor on bird's neck.  ISO 640.  Evaluative Metering at zero: 1/50 sec. at f/5.6.  Flash with Better Beamer at -2 1/3 stops acting as flash as main light!
Using the technique outlined above, it is possible to photograph as darkness approaches as long as there is enough light to focus. When working with digital well after the sun has gone down, the normal flash settings (0 or -1/3 for flash as main light) will severely overexpose the subject.  Simply dial in more and more minus on the flash until the image on the LCD does not look over-flashed and the histogram looks good.
Photo Theme:  More of my favorite Bosque images. 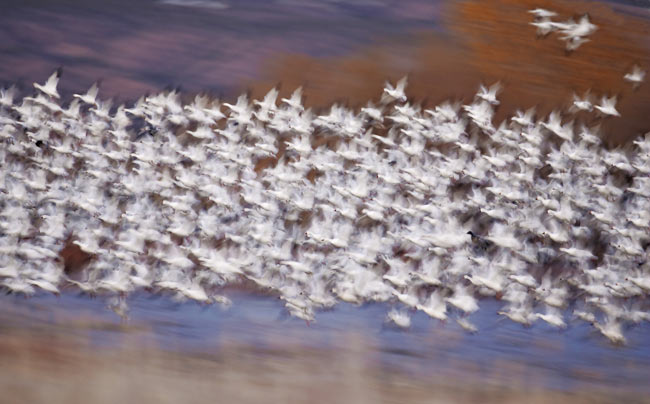 From veteran IPT participant CJ Hockett:
Thanks again for all the wonderful instruction, the atmosphere created by the IPT, the great food, and the social interaction with all the of the photographers at Bosque del Apache.  This was my first real experience at flight shooting and although i have a
long way to go to perfect my flight images I was amazed at how good some of my captures turned out.  I am very excited about improving my techniques in this area - my hands and eyes were just beginning to catch up with the birds by the end of the trip!
From Bosque IPT participant Chris Klapheke
Many thanks for a truly unique and wonderful experience at Bosque.  This was my first IPT (of any sort); what a way to start!  Your comments and instructions were most helpful.  I feel I learned more about my camera and technique in few days than I had in the previous year.  In addition, I now feel that I have the "lay of the land" at Bosque.  I have been thinking about this trip since I returned, and I can't wait to go back. Also, your kind comments on some of my images during the critique gave me a jolt of positive reinforcement that will keep me going for quite some time.  I look forward to experiencing another IPT, perhaps in Florida with no numb fingers!
Snow Geese taking flight at sunrise, Ed KranePool, Bosque Del Apache, NWR, San Antonio, New Mexico
Image copyright 2004 Arthur Morris/BIRDS AS ART
Canon 600mm f/4 L IS lens with 1.4X II TC and EOS 1D Mark II.  One-Shot AF with  Central Sensor/focused on the front bird in the flock, fired the camera when they lifted off, and prayed... ISO 250. Evaluative metering at zero: 1/800 sec. at f/11.
It was 11 degrees on the morning that this image was created.  It was made while I was lying on the ground with the lens on a large bean bag.  You gotta want it!
GOOD POINT GREGORY!
In Bulletin 154, in the caption for the image below, I wrote, "The two sensors below the central sensor were activated; the sensors were on the background, not on the bird, at the moment of exposure..."
Greg Downing, who did a great job co-leading the third Bosque IPT, wrote and pointed out that since I use Custom Function 17-1 the central sensor was active and was perfectly placed on the bird's face.  CF 17-1 expands the active sensors to include those immediately adjacent to the chosen sensors.  CF-17-1 is strongly recommended for flight and action photography.  Good catch Greg! 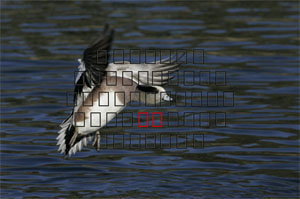 You can contact Hal at Hallagator@aol.com   or 772 - 913-1111.
American Bittern, Bosque Del Apache, NWR, San Antonio, New Mexico
Image copyright 2004 Arthur Morris/BIRDS AS ART
Canon 600mm f/4 L IS lens with 2XII TC and EOS 1D Mark II on Gitzo CF 1325 tripod with Wimberley head.  One-Shot AF with Central Sensor/focused on the eye and recomposed. ISO 250.  Evaluative Metering at zero: 1/640 sec. at f/10.
I was thrilled to have a chance to photograph this species for the first time at Bosqe near the end of my trip.  As regular readers know, I prefer to work at f/10 or 11 with the 2X TC.  With static subjects I lock all of the knobs on the Wimberley head for maximum sharpness. Note also the placement of the bird well back in the frame.
ROBERT O'TOOLE BOSQUE IMAGES
The two amazing images below were created by Robert O'Toole on the first Bosque IPT.  I continue to be amazed by the talent and creativity of many IPT participants and am often inspired by their work as well.  Way to go Robert!  (Note: Robert is a full time fashion photographer who has been on four IPTs (and the Kenya Photo Safari with Todd and me) within the past year.) 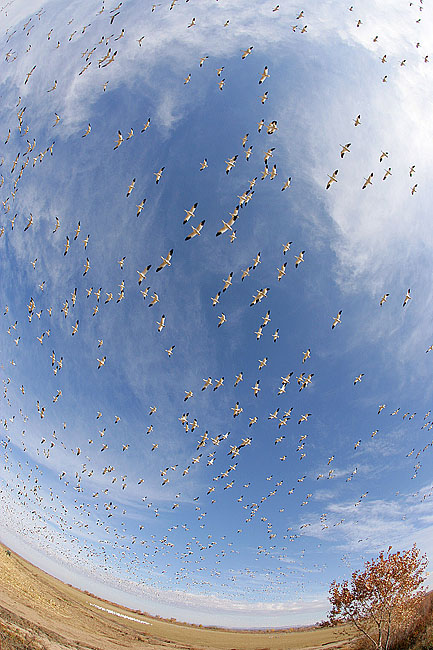 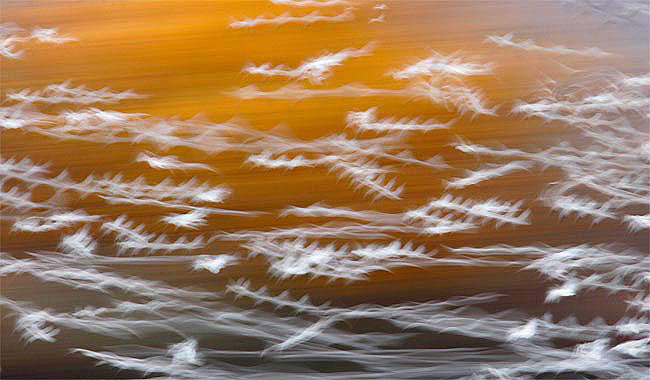 Snow Geese One Second Blur, Bosque Del Apache NWR, NM
Image copyright 2004/Robert O'toole
Canon 500mm f/4 L IS lens with 1.4X II TC and Canon EOS 1D Mark II.  ISO 400.   Evaluative metering +1/3 stop: 1/sec. at f/32.
Here are Robert's comments on this amazing image:  "You can count the wing beats of the geese during the 1 second exposure. The key was knowing where to stop and set up, thanks to you Artie.  I would have driven right past. Then I pre-visualized the shot all the way across the pond with the bright cottonwoods in the background. I quickly threw on the 1.4 X extender, rebalanced, leveled my tripod, locked the Wimberley's tilt arm control and left the pan control loose. As the geese took flight I quickly dialed the aperture down to f/32, held my finger on the shutter button, and started panning. Cuh-thunk, cuh-thunk,cuh-thunk...  I made several 1 second exposures."
Best and love and great picture-making to all,
Artie