Contact us by phone at 863-692-0906 (Eastern Time Zone) or by e-mail at birdsasart@att.net or birdsasart@verizon.net.  The att e-mail address is best from overseas.

We gladly accept credit card orders by phone 8am till 9pm Eastern Time (8 am till 3pm Fridays).

You can use the Paypal links on the web site to order anything.  Just type in the item(s) and the amount.  If using your own Paypal account, please send to either of the e-mail addresses above.

On my return from Ecuador on Friday, June 28, 2007, I was pulled out of line at US Customs in Miami and asked if I had “documentation” for my cameras and lenses (which had easily been identified via x-ray).  I stated that I did not and was told that my gear would be held in Miami by US customs, that I would need to provide documentation, and that after the documentation was received and verified that my gear would need to be imported by a broker and then be shipped as cargo to Orlando, all at my expense.  After about 30 minutes a pleasant woman came by and said that the photography gear would indeed be confiscated and held; she had many forms to fill out.  I explained to her that I had always traveled with documentation but that several years ago when I bought the forms to US Customs in Orlando that I was told, “We do not sign or verify those forms anymore.  You do not need them anymore.  You will not be hassled when you return to the US with your gear.”  I have been in and out of the country more than a dozen times since then without any documentation and until Friday, I had never had a problem.

I asked to speak to a supervisor, did so, and explained the above to him in a calm manner.  I added that several folks in the group with 500 mm lenses had been on the adjacent line and had breezed through.  After listening patiently he asked me, “What do you want?”    I said, “I want to get on my flight to Orlando with my cameras and lenses.  I will have documentation with me on all future trips.”  After about 15 minutes the pleasant woman came back and said that I could go.  I returned to the supervisor to thank him and he showed me the proper forms.  I had previously listed all of my gear on a single form, Department of Treasury “Certificate of Registration” Customs Form 4455 (020984).  He suggested instead that I fill out Customs Form 4457 (060992) listing several items on each form.  He continued by saying that once that form had been signed and stamped that it could be used for subsequent trips.

My plan is to fill out a single copy of Customs Form 4457 (060992) for each and every item that I own with a serial number (including my laptop) and then bring all the forms and all the great to the US Customs office at Orlando airport on a day when I am not traveling.  I will then bring the forms with me when I travel so that I can avoid being hassled upon my return.

I am not sure of the situation at other US Customs arrival stations (such as Detroit) but it would seem best that each of us travels with the proper documentation whenever traveling abroad.

ps:  the Galapagos trip report will be featured in the next Bulletin which will be sent before I head to Alaska and New York next Monday. 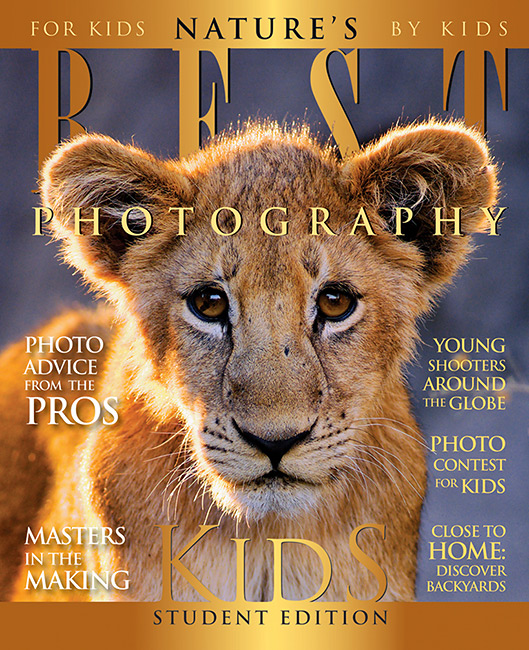 Early this August, the folks at Nature’s Best are presenting a special edition, Nature’s Best for Kids by Kids.  As the attached PDF file shows, the photography is spectacular.  Though designed to inspire young photographers, each issue will surely be enjoyed by photographers of all ages.   I had a chance to work with Mateusz Kowalski a few years back at NANPA and I can assure you that he is quite talented.

Do you know someone you would like to inspire?

A charter subscription is just $19.95 for 4 quarterly issues. To order a subscription or single issue of Nature's Best Photography for Kids: Call toll-free 1-888-884-5999 or 1-703-467-9783 or email editor Gabby Salazar at gsalazar@naturesbestforkids.com.

Note: Arthur Morris has been a Canon contract photographer since 1994 and continues in that role today.  Hunt's Photo of Boston, MA is a BAA sponsor as it Delkin Devices.  Back issues of all BAA Bulletins can be found in the Bulletin Archives which may be accessed from the home page at www.birdsasart.com