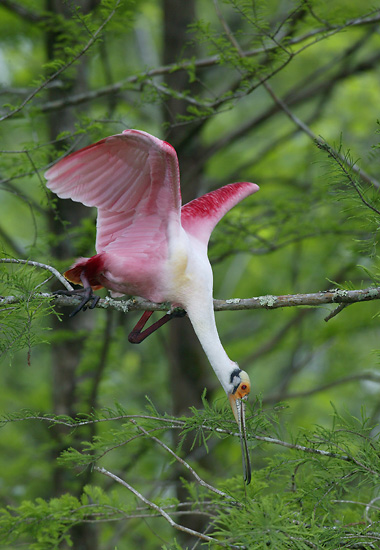 Roseate Spoonbill breaking branch, Lake Martin, LA
Image copyright 2004 Arthur Morris/BIRDS AS ART
Canon EOS 1Ds digital camera with 600mm f/4 L IS lens.
ISO 400.  Evaluative Metering -1/3 stop: 1/250 sec. at f/6.3 in Program Mode.
Fill flash at -2/3 stop with Better Beamer FX-2
Using the central sensor here and placing it on the side of the bird's upper breast yielded a perfect composition here.  This photograph was made in early April.  On the March IPT we will be working with both grey and green backgrounds as the cypresses will be just beginning to leaf.
DIGITAL BASICS PDF FILE
If you cannot confidently transform this: 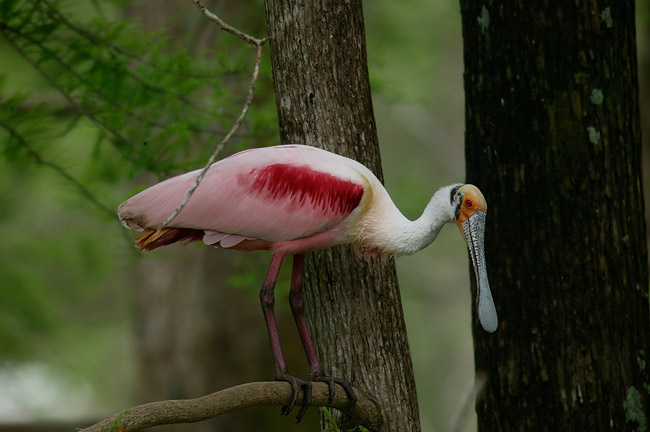 into this:
then you need to click here:  http://www.birdsasart.com/digitalbasics.htm and order the Digital Basics File.  We have sold more than 525 DBFs and have received nothing but thanks and praise.  It's as simple as 1, 2, 3, 4, 5:  crop, clone, Levels adjustment, Hue/Saturation adjustment, and Shadow/Highlight  adjustment.  If I learned to do it, anybody can!
THE LAKE MARTIN IPTs/DISCOUNT OFFER
Several folks have already signed up for the Lake Martin IPTs announced here recently.  We are happy to offer a $200 discount to folks signing up in advance for both of these IPTs.  Lodging will be at the LaQuinta Inn in Lafayette, La.
L SPOONBILLS, MAR 19-21 & , 3 -DAY: $899 (Limit 10)
The Lake Martin, Louisiana Roseate Spoonbill IPTs Roseate Spoonbill--and Great Egret--rookery in cypress swamp; courtship & nest building.  Barring a natural disaster spoonbill chicks are expected on the 2nd IPT only. The first IPT will feature spoonbills in mind-boggling breeding plumage (unlike anything I've ever seen here in Florida).  They will be courting, building nests, copulating, and fighting. Good flight photography opportunities are expected on both IPTs).  500 and 600mm lenses with 1.4 and 2X TCs are mandatory (rentals are available).  Also: Cattle Egret, Green and Little Blue Heron, both night-herons, sunrise scenics, nutria, alligators with young, and lots of flowers.  Sunny afternoons will be tough at this Lake Martin but mornings will be spectacular.  With cloudy weather the days will be long...  Registration includes a complimentary homemade crawfish etouffe dinner; hosts: Wes and Patti Ardoin.  (Fly to Lafayette, La.) 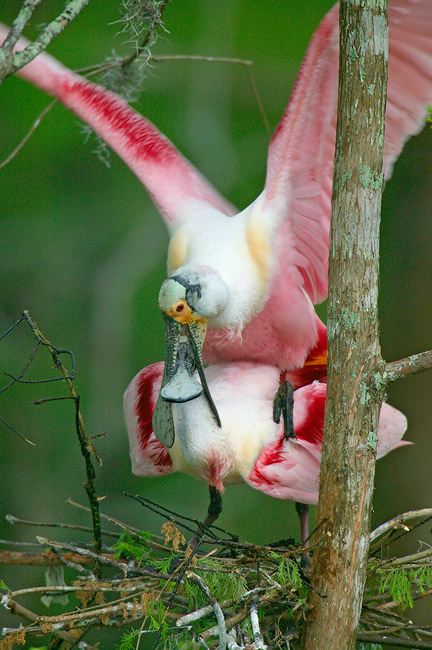 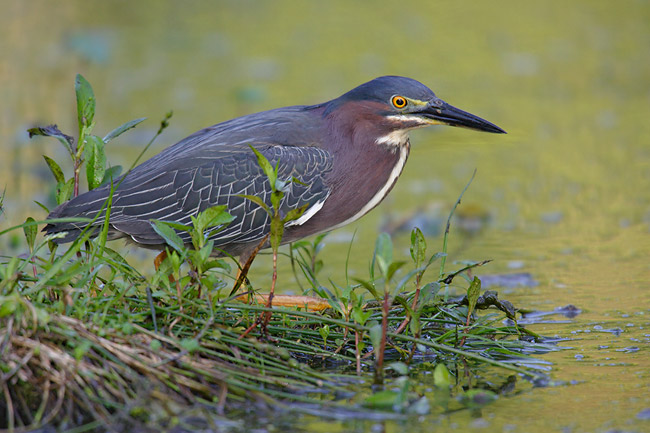 Green Heron, Lake Martin, LA
Image copyright 2004 Arthur Morris/BIRDS AS ART
Canon EOS 1D Mark II digital camera with 600mm f/4 L IS lens and 1.4X II TC.
ISO 400.  Evaluative Metering -1/3 stop: 1/250 sec. at f/5.6 in Av Mode.
Fill flash at -1 stop with Better Beamer FX-2
Placing the bird up in the frame here was instrumental in creating a pleasing composition that included the angled spray of grass stems seen below the subject.
SENSOR SWIPE SPATULAS NOW AVAILABLE ON LINE
If you are now brave enough to attempt to clean the sensor of your digital camera (see:  http://www.birdsasart.com/bn134.htm for best instructions) but cannot find the Wal-Mart spatula, or, if you bought ten spatulas and ruined them all while trying to shape them--it's not easy, you can now purchase one for $7.00 by clicking here:  http://www.pbase.com/image/23431905.   And the best news is that they are made in three sizes for the various digital cameras.  Please mention BIRDS AS ART BULLETINS if you order one or more.
Best and love and great picture making to all,
Artie

Note: Arthur Morris has been a Canon contract photographer since 1994 and continues in that role today.  Hunt's Photo of Boston, MA is a BIRDS AS ART sponsor, as is Delkin Devices.  Do feel free to forward this Bulletin to one or more photographer-friends. Those wishing to subscribe click here: Subscribe to our newsletter  Unsubscribe from our newsletter Back issues of relevant Bulletins are archived on the web site at:  http://www.birdsasart.com/bn.html