IPT TESTIMONIAL
Here is part of a letter that I received from Todd and Jackie Schneider who joined me and 8 others on the post-X-mas SW Florida IPT recently:
"Dear Art....
I wanted to commend and congratulate you on the "Putting Art in Your Nature Photography" slide show that was presented after the first day of shooting.  I know that you were feeling absolutely horrible and could barely speak, but that didn't  matter.  The images spoke for themselves.  I want to tell you that those images really knocked my socks off.  Ask anyone who knows me and they'll tell you that I never get excited about anything.  But ask Jackie about my thoughts on this particular slide show and she'll tell you that I was very excited and genuinely impressed.  I see the images in the latest photography magazines and they're good, but are all too often the same old ho-hum stuff.  But your images were not just about birds, but about "nature" and how best to capture it.  Just so you know, Jackie and I refer to this slide show as the "making something out of nothing slide show" because of the many examples where you made great photographs in situations where so many others couldn't "see" anything.  That to me is a true testament to your understanding and ability as a nature photographer, as well as a bird photographer.  I think the "something out of nothing" idea is what impacted me the most.  Honestly, I could sit through that slide show one hundred times and not get bored by it.  I truly hope I get another opportunity to see that slide show again.

The IPT elevated my enjoyment and energy for nature photography to a new level.  My only regret is that there wasn't more time.  More time to share stories with the great people, and especially more time out in the field.  It all went by so quickly.  There was so much to see and do each and every day.   Looking back, I would have been perfectly happy to spend all three days just in Little Estero Lagoon.  I can't wait to go back some day!   In the meantime, I'll have to keep working to improve my photography, try to stay up on digital for the inevitable switch-over one day, and find some way, some how to get out there to do more and more shooting.  One thing is for sure.  Going back to the old desk job will be tougher than ever before.

Well, I'd better wiggle on out of here.  Again, thanks so much for everything.  The IPT was a great success, and we certainly hope to do it again real soon.  Perhaps Bosque next time!" 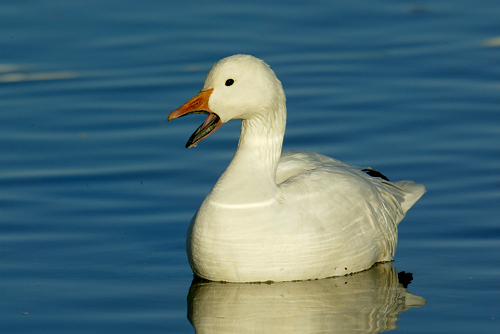 For years, I have had to deal with an extremely frustrating problem with my Canon 100-400mm IS zoom lens: when using the lens handheld with the IS turned on, the electrical contact between the lens and the camera was often severed.  I would press the shutter button with a great flight or action image in the viewfinder, but the camera would not fire.  The viewfinder display would black out.  When I looked at the LCD atop the camera, it would show "Av: 00." I would be forced to unmount and then remount the lens.  Sometimes this helped, and sometimes it did not.  At times, switching to a new battery and/or cleaning the contacts helped, but at other times these actions did not help.  I have run into several folks on IPTs who have had similar problems both with the 1-4 IS and with other IS lenses, and others have contacted me for help with this or similar problems via e-mail.

I spoke to many of the technical folks at Canon who suggested the following at various times:  clean the contacts, put in fresh batteries, make sure that the lens is firmly supported so that the electrical contact is maintained.  It was suggested at times that the high voltage requirements of the IS lenses taxed the lower end camera bodies beyond their electrical capabilities.  Having the same problems with EOS 1V and the EOS 1D ruled out the latter as a solution. About two weeks ago I spoke with Jerry Moore at the Canon Jamesburg, NJ Repair Facility.  He listened carefully to my story and said, "It sounds like a faulty IS system.  Send it in.  I did, had the lens Fed-Xed to me in California, and was delighted to find that the lens functioned perfectly.  Here is the contact information:  Canon Factory Service, 100 Jamesburg Road, Jamesburg, NJ 08831.   (732) 521-7000 or (732) 521-7888. 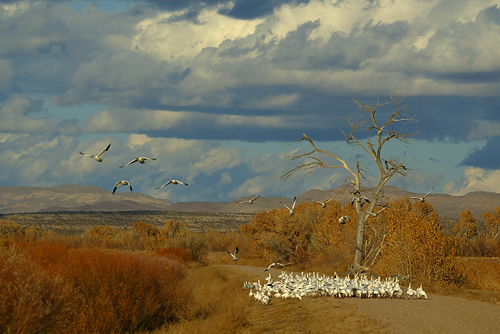 Note the amazing verstility of the Canon 100-400mm L IS zoom lens by comparing this image with that of the "Sandhill Cranes pair in flight" image above.

When I first began using a digital camera on a full time basis, I thought that a flashcard was a flashcard was a flashcard. Silly me.  I have since learned that the speed of the card affects how quickly you can resume making  photographs in rapid fire mode once the buffer is full, and how fast you are able to review the images.  On my recent California trip, I had the opportunity to field test the Delkin 640 mb e-Film PRO Compact Flash card, and I was most impressed.  I pretty much filled the two 640 cards each morning and afternoon, and they performed flawlessly.  The cards not only allowed me to shoot long bursts with the Canon EOS 1D (tests have shown that as many as 19 consecutive images may be made on a fresh card without pause), but allowed for a quick review of the histograms as well.  In addition, they downloaded to my laptop at a faster rate than the 512 Transcend cards that I had been using.
I was not amazed to learn that the Delkin 640 cards had the very fastest write-speeds for both the Canon 1Ds and the Canon EOS D-60 camera bodies, and were just an eyelash behind the renowned Lexar top-of-the-line cards with the 1D.  And this was not just manufacturer's hype, but the actual results of independent tests by Roger Galbraith, a highly respected digital photojournalist and consultant.   You can see the results of these and other similar tests at:
http://www.robgalbraith.com/diginews/2002-10/2002_10_28_delkin.html
You will surely enjoy tooling around the rest of this amazing, information-packed digital photography site after checking out the test results for yourself.
For more information on the Delkin 640 mb e-Film PRO Compact Flash cards themselves, visit:
http://www.delkin.com/
Do know that Alan Parry of Delkin generously sent me four 640 mb flash cards for field testing.  Thank you,  Alan!
See the Hunt's Specials below for a great price on these cards. 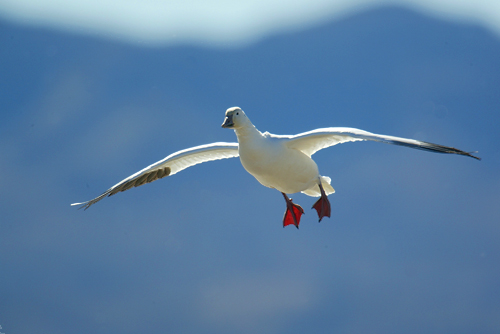 Snow Goose backlit, Bosque Del Apache NWR, New Mexico
Digital capture: EOS 1D, 2XII TC, EF 600mm f/4 L IS lens
ISO 200  Evaluative Metering +1 stop: 1/500 sec. at f/8
Image copyright 2002 Arthur Morris/BIRDS AS ART
One thing that very few folks realize about joining photo tours is that it gives them the opportunity to see how a creative leader thinks.  After telling my group for two days that the wind and the light and the flight patterns of the birds were all wrong, I had a brainstorm and  managed to get us in  position to make great images of backlit Snow Geese landing.  When someone said, "That was brilliant!" I responded by saying "If that's true, then why did it take me so long to figure it out?"  Note also that flight photography with the 1D and an effective focal length of 1560 mm (1200mm X 1.3) is a viable option...
AIR TRAVEL INFO
NW and American Airlines have instituted a $25 charge for bags weighing more than 50 pounds but less than 70 pounds. (There is and has been for quite some time a much steeper charge for bags over 70 pounds.)  On my recent American flights to and from San Diego I was not charged in spite of the fact that both of the bags on each leg were well in excess of the new 50 pound limit.  I am not sure if this was simply an oversight (I used curb-side check-in both times and recommend that you do the same if possible whenever flying) or if I was not charged because I was flying first class.
Another pleasant surprise was that even though I changed my return flight before heading to San Diego, this did not trigger a dump-search of my checked bags as it had always done in the past.  This is almost surely due to the implementation of the new security procedures for all checked baggage.  This brings us to the following which has been excerpted and adapted from an e-mail from Eugene Mopsik, Executive Director of ASMP (American Society of Media Photographers) of which I am a member:
With regards to locked bags:  Equipment cases may be locked.  When you arrive at the airline's ticket counter to check your bags, you will be asked if your bags are locked.  When you answer "Yes" you  will be handed a TSA notice requesting that for security reasons you unlock your bags.   Ask for a TSA supervisor or air carrier supervisor and identify  yourself through your business card (and ASMP membership card if applicable) as a  working professional photographer.  Let them know that your cases are
locked, however, give them your name and cell phone number in the event that the cases need to be opened.  Also, make sure that your Passenger Name Record includes a notation of your professional status and that you are available to open the cases for inspection.  Place a sticker on your cases with your name and cell phone number indicating that you are available to unlock the cases.  Place a notice inside each case indicating that the contents represent sensitive professional equipment and that you would appreciate all care with inspection and repacking.  TSA does not want to damage your cases, however they may want to inspect the contents. Be patient, be polite, and be professional.

TSA was very responsive to the issues affecting ASMP members. TSA has requested that in the event of a "horror story" involving an ASMP member, that the information be sent to ASMP for forwarding to TSA.  Please send any such information to Mopsik@asmp.org.   (I have e-mailed Eugene and asked him how the above affects professionals traveling with photographic equipment that is packed in checked bags along with clothing and other personal items.  I shall share his response with you when I hear from him.)
ASMP is the leading trade association for photographers who photograph primarily for publication. ASMP promotes photographers' rights, educates photographers in better business practices, produces business publications for photographers and helps buyers find professional photographers.ASMP was founded in 1944 by a handful of the world's leading photojournalists and is recognized internationally for its leadership role. ASMP has over 5,000 members, including many of the world's greatest photographers, in 40 chapters nationwide.  To learn more about ASMP or to join, visit: http://www.asmp.org
(If you sell your images on a regular basis, it is in your very best interests to join ASMP; AM.)